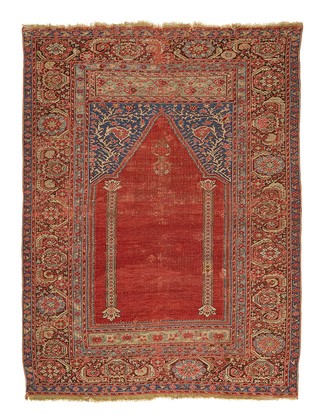 This rug is one of the type of Ghiordes prayer rugs often classified as a "Transylvanian" as similar examples were found in the churches of Eastern Europe. It is generally believed that the rugs of Ghiordes "Transylvanian" type slightly re-date other Ghiordes weavings. A similar example of the current rugs is the Schwarze Kirche, Kronstadt, inv.no. 241 (see Kertesz-Badrus) A: Türkische Teppiche in Siebenbürgen, Bucharest, 1985, no.40